Updates: Substitute “jessie” for “wheezy” when adding apt-get sources. Other than that, everything remains the same under the Jessie release of Raspbian.

This installation will be done from the command line, and involves a bit more configuration than some of the other features in this series. Get yourself logged in to a command line as “pi”, and start by installing MiniDLNA. 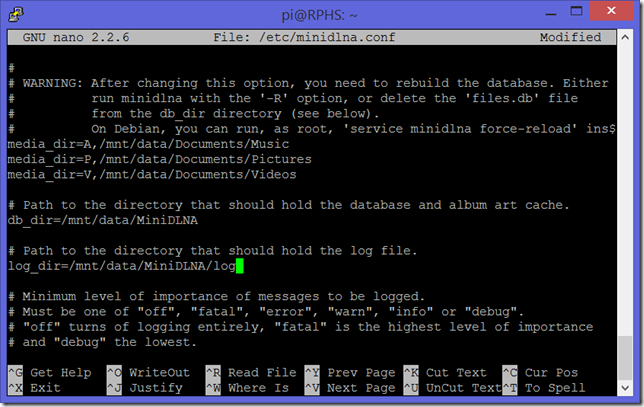 Close and save the file (ctrl-x,y,enter). Next, you need to set up MiniDLNA to run automatically at boot time.

A Webmin module exists for MiniDLNA that will make it easier to manage things remotely in the future. It is available at http://sourceforge.net/projects/minidlnawebmin/files. Pick the latest version, and download the .wbm file to somewhere convenient. You could download this through a browser directly on the Raspberry Pi if you want, but I’ll write the directions for downloading it from your primary computer.

Once the .wbm file is downloaded, go to Webmin –> Webmin Configuration, and click on “Webmin Modules”. Pick “From uploaded file”, click the “Choose File” button, and browse to find the file you just saved. Click “Install Module”, and the MiniDLNA module will be installed.

You should now have an entry under Servers called “MiniDLNA server”. This module is pretty simple, and does little more than show you the settings from its configuration file. Down at the bottom of the page, though, are two buttons that you can use to restart the server, or force it to rescan its folders immediately.

Click on “Rescan” to force MiniDLNA to start indexing the files on the hard drive.

I am not a MiniDLNA expert, by any means, so you might want to look elsewhere for more configuration information. Also, MiniDLNA has recently changed names to become “ReadyMedia”, but a new release does not seem to be ready for use on the Raspberry Pi at the time I’m writing this.

In the next post, we’ll add a BitTorrent server for downloading things from the internet.