Important: This post is part of a series. Each post builds on the previous ones. If you are trying to add just one thing to an existing system that was not built by following this series in order then I cannot promise that these instructions will work for you. In most cases they will, though. Please refer to the Introduction for a list of all the different posts in the series.

Self-Promotion: I have recorded this series as a screencast for Pluralsight:
(http://www.pluralsight.com/courses/raspberry-pi-home-server)
If you have a Pluralsight subscription, please consider watching it. Reading the instructions is one thing, but actually watching it being done demystifies the whole process.

Note: It is also possible for a Raspberry Pi 2 or above to run Plex Media Server, which is a nicer experience overall, but as of the time of this writing, still doesn’t get along with Windows Media Player. WMP will see a Plex server, but can’t seem to play any media off of it. A walkthrough of installing and configuring Plex Media Server is included in my Pluralsight course, but I’m not including it in the blog just yet because of the compatibility issues with WMP, and because MiniDLNA is a smaller, leaner package which I think works a bit better on the Raspberry Pi. I’ll be adding a separate post about Plex Media Server later on, at which time I’ll revise this note.

This installation will be done from the command line, and involves a bit more configuration than some of the other features in this series. Get yourself logged in to a command line as “pi”, and start by installing MiniDLNA. The version in the repositories isnt always totally up to date, but it has worked well for me so far.

Note that the paths are case sensitive, so while my “Public” share is capitalized, the actual folder is not. The folders within my public folder are, however. This is more for demonstration purposes than anything. Feel free to capitalize your folders however you like. 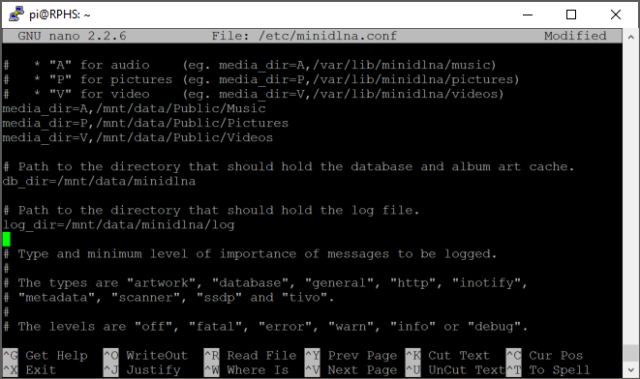 Close and save the file (ctrl-x,y,enter).

If you were to start MiniDLNA and check its logs right now, you would find that it complains that the number of “watches” is too low. This is how many folders and files it can be watching for changes at a time, and currently its default value is too low in its opinion. It will probably work just fine as is, but we can shut the error up easily enough before continuing. Edit the sysctl.conf file.

At the bottom of the file, add a line that says

This is the smallest number that MiniDLNA won’t complain about. Close and save the file.

Next, you need to set up MiniDLNA to run automatically at boot time.

And finally, reboot the Pi to take both of these changes into account.

When everything has restarted, you should have a working MiniDLNA installation, with no complaints in the log file. 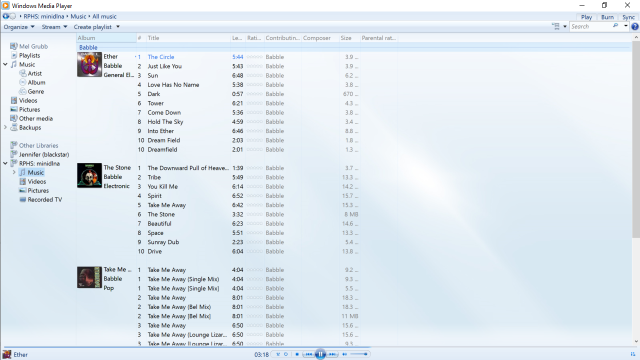 I am not a MiniDLNA expert, by any means, so you might want to look elsewhere for more configuration information. Also, MiniDLNA has recently changed names to become “ReadyMedia”, but the Raspberry Pi version still calls itself “MiniDLNA”, at least for now.

In the next post, we’ll add an OpenVPN server, allowing you to securely connect to your home network when you’re away.